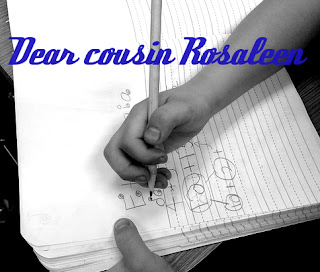 Through the eyes of children we can glean snippets of the lives of our forebears. Many newspapers and magazines have had children's sections where young people were encouraged to write about their lives and contribute to the publication. The Southern Cross paper in South Australia was no exception starting out with a children's corner in its early editions.

In a Children's Corner of the 21 September, 1894 edition, Mrs A. M. Ryan  of the Catholic Book depot in Gawler Place under the nom de plume "Aunt Eily"(1) suggested children write to her (2)
By March 1895 the children's corner had become St Vincent's Juvenile Club and all children were treated as cousins, with "Aunt Eily" referring to them as nieces and nephews. The club was open to all young people from the age of 5 - 18.  "Cousin Rosaleen" - Josephine Moroney succeeded her in 1908 and edited the children's page until her death in April 1922 .

Membership cards were issued, competitions run to encourage fundraising for the orphanage at Goodwood and later that at Largs Bay. Letters were answered with positive comments and encouragement. Saints' stories, tales from scripture and moral exhortations were interspersed with letters, poems, jokes and riddles. All monetary donations were acknowledged but not all letters could be published.

In 1922 the children's section of the paper became The Sunshine Club conducted by "Wattle Blossom" (3) This change also brought about a change in membership, with age restricted to 6 -16. By  May 1943 when "Wattle Blossom" handed over the reins to Maureen the name had reverted to The Children's Page. In January of 1946 it had been renamed The Five Stars Club under the leadership of Felicity. (4)

My aunt, Honora Mary Horgan was born at Alma in South Australia to Elizabeth Agnes (Smyth) and husband Andrew Joseph Horgan on the 4th December 1906. Her younger brothers were Edward John, (my father) born May 30th, 1908 and Joseph Andrew, born April 21st, 1910.

Here we see her writing to the Southern Cross Children's Pages as she collects money for orphans housed at Goodwood. The letters below provide glimpses of a child's life on a farm between 1916 and 1923. The last ones included are from Joseph. There do not appear to be any letters from (my father) Eddie.

Alma, May 2. 1916
Dear Cousin—I have never written to you before. I hope you will accept me as a new cousin. I am nine years and five months old. We have a pet dove - it comes inside, and we give it crumbs to eat - and a young puppy. We can put our hand into his mouth, and he will not bite. I have two brothers, their names are Eddie and Joseph. I enclose 1/ for orphans.
I hope you and the orphans are well.
NORA MARY HORGAN. (5)

Alma, August 17, 1916.
Dear Cousin Rosaleen—It is a long time since I wrote to you, you must be forgetting me. We had Australia Day in Alma on July 26. The Alma South school children were dressed up to represent different nations. I was an Irish girl. We are feeding five calves. They eat hay or chaff. We have a little foal; its mother's name is Rose. He runs about quite happy.

I read the Children's Page every week, and like the letters very much. We have some pigs. Two of them get out and the dog bites them, and they stay away for a while. I am in the second class at school. The teacher's name is Miss Dubois. We live two miles from the school. We drive seven miles to Mass every Sunday. We are having a week's holiday soon. I am going down to Salisbury to my uncle's for it. I went to my grandma's at Linwood last holiday. I have a cousin at Loreta Convent. She is going for an exam, this month. Please ask the little orphans to say a prayer that she may pass. I am sending 6d. for orphans and a penny for membership card, which I received, and like it.
With love from
NORA MARY HORGAN. (6)

[The grandmother mentioned is Hanorah Horgan (born O'Leary) aged 76 in 1916, living on the farm at Linwood where Andrew Joseph Horgan was born.]


Alma, November 15. 1916
Dear Cousin Rosaleen—I have been for my holiday since I last wrote to you. I enjoyed myself very much. Aunty took me to town one day. I am sending my card back to you. I have £1 1/ on it. We have six little white pigs and two black ones. We are milking seven cows, and have two calves. We sold the rest. It has been, cold and wet here for over a week. It is rough, today. This is a short letter, but I have no more news to tell now.
From your loving cousin,
NORA MARY HORGAN. (7) 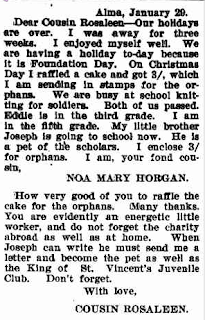 Dear Cousin Rosaleen—Our holidays are over. I was away for three weeks. I enjoyed myself well. We are having a holiday to-day because it is Foundation Day. On Christmas Day I raffled a cake and got 3/, which I am sending in stamps for the orphans. We are busy at school knitting for soldiers. Both of us passed. Eddie is in the third grade. I am in the fifth grade. My little brother Joseph is going to school now. He is a pet of the scholars. I enclose 3/ for orphans.


Dear Cousin Rosaleen—I am returning my card with two pounds two shillings and sixpence on it. I had hard work to collect it because there are so many other collections for other things. I hope it will be a little help for the orphans. I sold some papers and my father gave me some old iron to sell, and I also sold some lollies, and out of them all I made over eight shillings to help with my card. I hope the fete will be a great success. Our examination will be next month. I hope to pass into the VII. Grade.

Isn't it lovely to think that the war is over at last? A lady came to our school on Wednesday to teach us how to spin wool. We will have five weeks' holiday at Christmas time. We have had three days' holiday this week in honour of peace. The foxes are very plentiful about here now. They have taken a great number of poultry from people around here lately. They took some of our turkeys. They are going to start a Catholic library in Hamley Bridge. I am going to join it when it is opened, as I like reading very much.
I remain,
your loving cousin,
NORA MARY HORGAN. (9)

Hanora Mary Horgan joined The Sisters of St Joseph as Sister Margarette. Later in life she spent some time in Glenside Hospital and then lived at "The Pines" at Plympton, a convent run by the Good Shepherd nuns. When I visited her there as a young child with my parents  I remember her as a kindly lady who always gave us a prayer card as a gift. She died at age 77 on May 2nd, 1984 and is buried in the Navan Catholic Cemetery, Riverton alongside her parents and brothers. 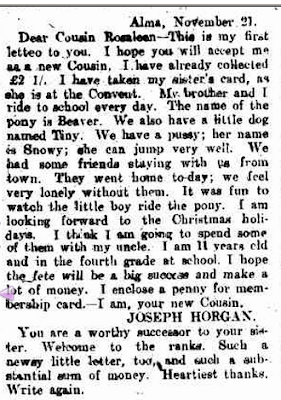 Dear Cousin Rosaleen—This is my first letter to you. I hope you will accept me as a new Cousin. I have already collected £2 1/. I have taken my sister's card, as she is at the Convent. My brother and I ride to school every day. The name of the pony is Beaver. We also have a little dog named Tiny. We have a pussy; her name is Snowy; she can jump very well. We had some friends staying with us from town. They went home to-day; we feel very lonely without them. It was fun to watch the little boy ride the pony. I am looking forward to the Christmas holidays. I think I am going to spend some of them with my uncle. I am 11 years old and in the fourth grade at school. I hope the fete will be a big success and make a lot of money. I enclose a penny for membership card.


Dear Wattle Blossom,
My brother and I ride to school on a little pony named Beaver. I have not written to you before, but I am now wishing for a membership card. I am glad the Orphanage fete was such a success. Our cat has three kittens, Darkey, Sandy and Spotty.We are reading a book entitled "The Little Black Princess." Have you ever read it?. I did not have the pleasure of being at the Pilgrimage, but prayed for the great success of it. I am enclosing threepence for membership card. I hope you and the Orphans will have a Happy New Year.
I am your new Clubmate
JOSEPH HORGAN. (11)

These letters provide a glimpse into the childhood life of my father and his siblings. The tradition of writing to the children's pages was continued in to my generation. The story of our Uncle Joe is for another day.