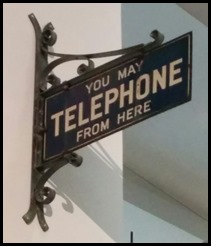 A pause for reflection


This sign in The Science Museum in London reminded me of earlier years. We did not have this sign in our house but next to the black Bakelite telephone, similar to the one below, stood a money box. To make a phone call was a privilege not to be taken lightly and the 3-minute calls would be paid for with 6d. Calls to relatives were made on Christmas Day, booked in advance and time strictly monitored.

I took these photos with my mobile phone as I explored the floor in the Science museum that covered the development of communications from early telegraph transmissions to the latest in web developments. This led me to reflect on the many common articles from my childhood that have now been replaced by apps and functions on my mobile phone.

10 things my phone has replaced 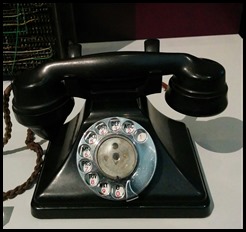 1. The Bakelite phone with its accompanying moneybox – now I can make calls from wherever there is mobile reception. From London I could speak to my husband in Australia using free wi-fi, no coins needed.

2.  Lists on paper - My mother continually wrote lists on the back of used envelopes, shopping lists, tasks to be done, reminder lists. We now receive very few letters through the post. Correspondence by email has replaced most bills and handwritten letters, so used envelopes are few. My lists are electronic with my phone sending me reminders. My email can be managed on my phone.

3 The calendar on the wall has been replaced by that on my phone, accessible on all the connected devices in our household.

4. The dictionary that was ever present for homework and constantly consulted to resolve Scrabble disputes has been superseded by easy access to web definitions. Now I can tap on the speaker symbol next to the word to hear its pronunciation.

5. Cameras and film – These were expensive items and used sparingly. I have very few photos of my childhood years but with my phone in hand, I have no need to remember to buy film for a special occasion or to post off the film to be developed. No longer do I need to print and pay for multiple copies of a photo. The photos taken can be simply shared through a link sent to friends and family via email or if I preferred, posted to a public space such as Facebook, Instagram or on one of a myriad of other sites such as the photos on this blog, viewable by anyone.

6. The street directory – This was housed in the car and studied carefully before a trip to the city. Now Google maps guides my way and shows me the direction I am travelling, estimated travelling time whether by car, public transport, cycling or walking. Gone are the days of trying to find that street which was always in the join between two pages.

7. The alarm clock – This needed winding to keep correct time and the loud insistent ring was sure to wake all the inhabitants of the house. The clock on the phone has an alarm, stopwatch, world time zones,  and timer. Gentle tones can coax one awake with recurring intervals set to awake the persistent sleeper.

8. The address book with a page or two for each letter of the alphabet – Every time someone moved house, the address was crossed out and the new one added above or below. Each year at Christmas time addresses were checked against incoming cards. Woe betide anyone with multiple families of relatives with the same surname, the pages filled rapidly.

9. The birthday book – This item kept track of important dates to be remembered each year. The friends, family, neighbours whose birthdays should be acknowledged were recorded with new babies names added as information was received.

10. The personal teledex – this stored commonly used numbers, next to the house phone. Now the address book, the birthday book and the teledex are all combined into one address book commonly referred to as the contacts list.  The telephone directory, those cumbersome big yellow tomes that were updated each year but often out of date by the time they were distributed, have been replaced with a simple web search.

These are just a few of the things from my earlier years that my phone has replaced. Now I just have to remember to have the battery fully charged!
By crgalvin at March 28, 2016 4 comments: Links to this post
Email ThisBlogThis!Share to TwitterShare to FacebookShare to Pinterest

Origins and age at death

The chart below shows where my ancestors were born and age at death. The 5th generation great- great grandparents will most likely have at least 30 of the 32 coloured green for Ireland but as their birth places have not yet been determined I have limited this chart to 4 generations. All of the great grandparents migrated to South Australia between 1840 and 1868 as children or young adults. All were married in South Australia and 7 of the 8 also died in South Australia. George Bennett is still an unsolved mystery. 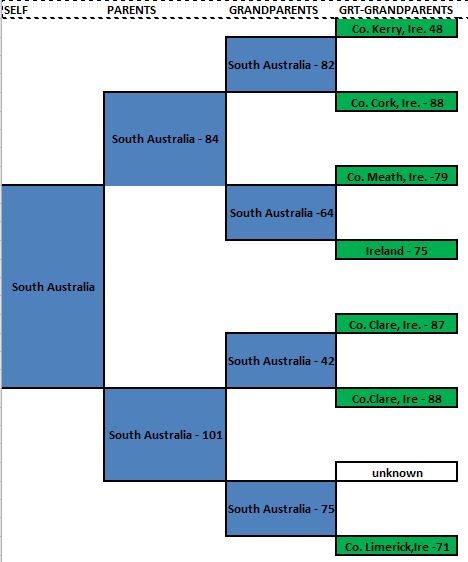 Thanks to Jill and Alona for pointing out this activity.