Recollections of school days past

As the youngest of seven children I was very keen to attend school with my older siblings. We had often “played” schools at home and I was familiar with the grounds of the local primary school. Accompanied by several siblings, I walked about 520 metres from the farm house out to the Main North Road where the school bus, which had come from Hamley Bridge, collected us. Some children were bound for the primary school in Tarlee and others stayed on for the trip up to the secondary school in Riverton.

In South Australia in the mid 1950s when my school years commenced, children attended from the beginning of the year after they had turned five. The Tarlee school which had been established in 1876 had been replaced with a new building in 1922, by 1956 it had certainly seen better days.
In this building there were two classrooms. The youngest students from Grades 1 - 3 were taught by Miss Dora Thomas and the older group Grades 4 -7 by Mr Reg Yelland. At the time I attended there were about 52 students split between the two classrooms.
My 1959 Grade 4 report shows that we were tested on Reading, Dictation, Composition, Oral Arithmetic, Written Arithmetic, Writing, English, History and Geography. 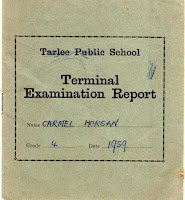 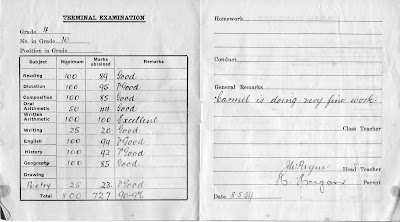 Wednesday afternoons were devoted to art and crafts, a well remembered one being the cushions we stitched from hessian sugar sacks.

Friday afternoons were time for sport. Vigoro was a popular game as both boys and girls could participate. During recess and lunch breaks we played All Over Red Rover, Brandy, Hopscotch and Marbles along with lots of Chasey.

By 1960, Catholic school students were allowed to travel on the government provided school buses and so with my sister Marie, I now took the longer journey to Riverton.  There we were enrolled in the Catholic primary school run by the Sisters of Mercy.

The bus on which we had previously only travelled as far as Tarlee, now dropped us at the corner of Horner Street in Riverton and we trudged up the hill come rain or shine to the convent. This was also a two teacher school.

Under Sister Mary Celine’s tutelage we now added piano lessons to our classes. The nuns lived in the house that had formerly been the doctor's residence and it was in a small room there that we took piano lessons.

Classes were small with just 10 students in my final year 7. With extra help from the nuns I was encouraged to sit for the Catholic scholarship exams at the end of primary school. This led to my parents receiving offers of a boarding scholarship to a couple of Catholic schools in Adelaide.

As four of my five elder sisters had attended Cabra Convent at Clovelly Park in previous years this was now my destination.


Kitted out in hand-me-down uniforms all proudly sewn with my new Cash's name tags, my five year boarding school adventure began in February of 1963.

For a farm raised child this certainly was an eye opener. Suddenly I was in a class of 51 students all in one room rather than 51 in the whole school. Cabra had about 90 - 100 boarders in the years I attended. Most of these girls were from the countryside so soon firm friendships were established.

Our days were marked by unvarying routine. The nun ringing the first bell walked through the dormitories clanging with vigour at 6.30 am as boarders were encouraged to attend morning Mass. For those who chose not to attend, a second bell at 7 am signalled time to rise. Silence was to be maintained until all had assembled in the refectory downstairs and grace was said before breakfast.

My mother had always warmed milk for breakfast cereal so the shock of cold milk in huge jugs alongside giant pots of brewed tea was new to me. Marmalade and Vegemite were supplied for the usually cold toast but any other condiments had to be brought from home.

Each term we were allocated to a new table for meals. At each table there was a mixture of girls from all grades. This was an effective method of ensuring that the boarders all got to know each other throughout the year. Rosters for cleaning tables and scullery duty usually resulted in one duty a term in the ten week, three term regime of the time.

After breakfast there was a quick rush upstairs to make beds, clean teeth, pass dormitory inspection and prepare for the day ahead. .At 8.30 am the dormitories were locked for the day and we proceeded to join the day scrags (students) for classes. Dinner, which was lunch time, was sometimes a roast with one potato and one piece of pumpkin along with swathes of tinned green peas or beans. The smell of corned beef and cabbage were common. Neither of those foods have graced my table in the years since boarding school.

Sinker, damper, stodge, no matter what we called it, cake of some sort or other was provided for afternoon tea at the end of the school day. Hungry girls can consume even the most unappetising of foods.

Tea at 6 pm after an hour of supervised study was bread, bread and more bread  - always white of course. There was often tinned spaghetti or baked beans and any other foods were not memorable. A Sunday night treat was fried fritz, a uniquely named South Australian processed meat. (In other locations known as devon, polony, luncheon meat or Windsor sausage)

I remember competitions to see who could eat the most slices of bread. Sometimes 10 pieces were managed if one was really hungry! We stored our own food in a locker room under the rickety stairs but this was mostly discouraged because of the risk of vermin. Milo, homemade treats, honey and cakes after exeat weekends were favoured goodies.

There was brief respite in the dormitories between the evening meal and second study. During this time most girls took baths or showers. Second study at 7.15 pm in the classrooms immediately below the dormitories finished at different intervals about 15 minutes apart depending on grade level. The senior years studied until 9.15 with lights out by 10.

Saturday morning was cleaning and laundry time. Beds were stripped and remade, laundry sorted and bundled and the previous week’s washing returned. Thorough inspection of cupboards and cubicles was carried out on Saturday mornings and this was the day of the week that many washed their hair.

Each term Mum would supply a tube of toothpaste and a bar of soap to be kept in one’s sponge bag as it was known. Any additional needs had to be purchased from my 10 shillings a term allowance. The nuns controlled the allowances and on Saturday mornings one could withdraw cash needed provided an explanation of expenditure was given. Some girls had large allowances and spent freely at the tuckshop but I learnt to guard those Saturday morning sixpences carefully.

Classes were sorted into three streams and I advanced through the academic stream for five years with conscientious study but unspectacular results. My years at boarding school were largely carefree and happy providing strong friendships and building good study habits in a supportive atmosphere.

In my final year at a Boarders' Social I met my future husband. We have now been married for 47 years. I have much to be grateful for.