Found in Family Notices. What’s this? 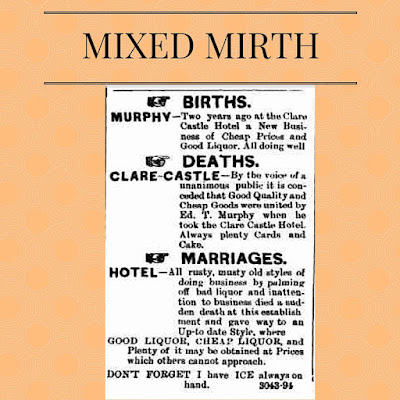 In 1901 a certain Ed. T. Murphy proprietor of the Clare Castle Hotel in Kapunda, South Australia, had decided to advertise his goods and services in a novel manner as attested by the text in the illustration. (1)

Did you notice his mistake? Yes, of course, marriage should come before death and somehow he has mixed up the headings….. or perhaps the proprietor of the newspaper was having a joke on him and deliberately switched the order.

Ah, the delights of text correction in Trove. I’ve been working through all the Family Notices in the Kapunda Herald over a period of about 18 months when this one popped up today to provide an entertaining variation.

On looking further into the exploits of Ed. T Murphy, he was not only a publican who had owned a variety of hotels in Adelaide but was a consistent correspondent to the newspapers of the day. He wrote letters about licensing laws, police appointments and football matches to mention but a few topics.


The Clare Castle Hotel situated at the southern end of Kapunda opened in 1859. It had suffered a series of reversals through the years leading up to its acquisition by Ed.T. Murphy. In 1862, the original licensee, James Glynn, was drowned in an accident while crossing the River Light to the Catholic church. He was washed away in a flood and his horse found dead the following morning. (2) His wife with several children to support, initially took over the licence. However, by the late 1860s, a number of applicants had been refused the licence.

It was finally granted to W. Slattery in March 1871 when he received the support of the local council who saw the need for a hotel at the southern end of the town.  A transfer of this licence was effected to G. Young in September 1882 followed by another transfer to M. McInherney in December of the same year. In May of 1886 the hotel was advertised:

In July 1888, Mrs. McInherney's only son Patrick James died aged 16 and she disposed of the business. Her husband had died in 1875.

In 1889, James Battams was in charge of the hotel and by March 1891 Michael Fitzgerald had taken over the licence. His short-lived tenancy ended in September in the great depression of 1891. He was declared insolvent and the premises and all it contained were sold. (4) 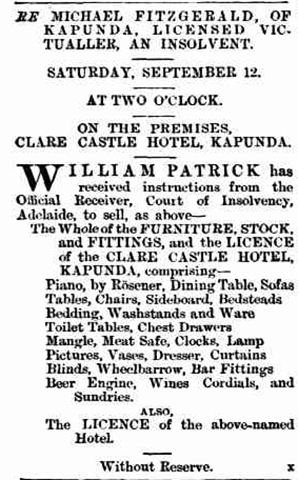 By March of 1894 business had improved and the Licensing Bench had approved licences for the following 8 hotels in Kapunda:

The Globe Hotel, Sir John Franklin Hotel, Railway Hotel, Morning Star Hotel, Prince of Wales Hotel, Lord Palmerston Hotel, North Kapunda Hotel and the Clare Castle Hotel. Mary McInherney had re-obtained the licence for the Clare Castle. (5) She was compelled to relinquish the business about 1897/8 due to ill health and died in 1901 at age 53. (6)


E. T. Murphy finally gained the licence to the Clare Castle Hotel in June of 1899 (7) and by March of the following year, he had been served a notice to carry out work on the hotel. All did not proceed smoothly with the licencing inspector detailing that a new seat must be installed in an outbuilding before the licence was renewed. (8) The work was undertaken and the business of the hotel proceeded. Perhaps his humour in the 1901 advertisement first mentioned, was not appreciated or his business took him elsewhere, as by June 1902 the licence had passed to yet another licensee. Edward Thomas Murphy died in August 1952 at age 84. An obituary details some of his hotel holdings. (9)

All this just from the correction of Family Notices. This led me down a long rabbit hole but provided an interesting glance into the state of the hotels of the time in Kapunda and the licencing laws that governed them.

My Trove Tuesday posts are snippets found about families or the history of the local area. A first cousin twice removed, Denis Horgan, owned the North Kapunda hotel from 1912 - a story for another day.

By crgalvin at May 17, 2016 3 comments: Links to this post
Email ThisBlogThis!Share to TwitterShare to FacebookShare to Pinterest
Labels: hotels, Kapunda
Newer Posts Older Posts Home
Subscribe to: Posts (Atom)