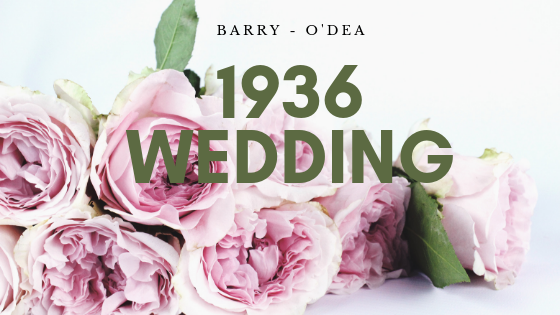 Romance in the air

Looking back once more at my mother's family, the 1930s decade was awash with weddings. Shortly before the 1933 wedding of her eldest sister Mary, the next in line Margaret Monica O'Dea announced her engagement to James Barry. Margaret Monica had been born in Hamley Bridge, South Australia on 4 May 1910 to parents Patrick and Georgina O'Dea. James Peter Barry was the son of Thomas Benedict and Johannah Barry. He was three years older than Margaret.

It was almost three years before their wedding took place in 1936. The depression years had taken their toll and for a young couple the challenges of saving for a marriage and obtaining some household goods would have been difficult. In December of 1936 this report of their wedding appeared in the Southern Cross, South Australia's Catholic weekly newspaper.

At St. Mary's Church, Hamley Bridge, on November 3, the marriage was solemnised of Margaret Monica, second daughter of Mrs. G. E. O'Dea, Hamley Bridge, to James Peter Barry, youngest son of Mr. and Mrs. T. Barry, Flinders Park, by the Rev. Father Farrelly. The bride, who entered the church on the arm of her brother, Jack, was gowned in white marocain, with lace yoke, and insets of lace in the full sleeves. The skirt, which had godets of fine pleats, merged into a train. She wore an embroidered tulle veil, which formed a long train, lent by Mrs. D. Healy, and carried a bouquet of pink and white rosebuds.

Miss Hannah O'Dea, sister of the bride, was bridesmaid. She was frocked in apple green floral georgette, made tunic style, featuring high neckline and long sleeves. A green picture hat, and shoes to match completed her toilette. She carried a bouquet of pink rosebuds.

Prior to the marriage, the bride was tendered a kitchen evening in the Druids' Hall, by her many friends. Mr. S. Casaretto thanked those present on behalf of the guest.₂

The photo is one from our family collection and as well as the bride and groom has a lovely picture of my mother Hannah who in November of 1936 was 24 years old. At this stage she was engaged to Eddie Horgan and their marriage followed shortly after in April of 1937.

James (Uncle Jim) died in July 1974 and Margaret (Auntie Marg) lived for another 25 years until her death in January 2000. They are buried together in the Murray Bridge cemetery. 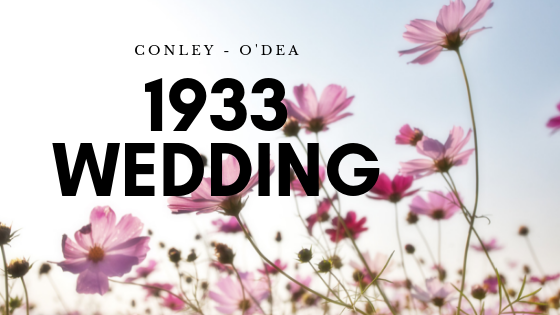 My mother Hannah O'Dea (Horgan) had two older sisters and three younger brothers. During the 1920s the newspapers of the day often published columns of interest from country centres mentioning a variety of comings and goings as well as social activities in the towns and districts.  There are several mentions of Misses M.(Mary) M. (Margaret) and H. (Hannah) O'Dea attending such functions in and around Hamley Bridge, South Australia.

In December 1929 the engagement of her 21 year old sister Mary was announced in the papers:

A long engagement was not uncommon and it was not until almost four years later in November of 1933 a short notice appeared in the Chronicle - Miss Mary O'Dea and Mr. Martin Conley were given a social evening at Hamley Bridge prior to their marriage. ₂

This O'Dea family, Georgina and her 6 children, had been living in Hamley Bridge near Georgina's in-laws after the death of her husband in 1919. Mary Ellen O'Dea, the eldest daughter pictured here, was born 1st June 1908 at Pinkerton Plains when her parents lived there on a farm before their move to Ngallo in 1911.

Martin Conley, son of James and Catherine, was almost ten years senior to his bride. Two weeks after their marriage an article describing the event and its participants appeared as below.
(Paragraphing has been added to the transcription for ease of reading) 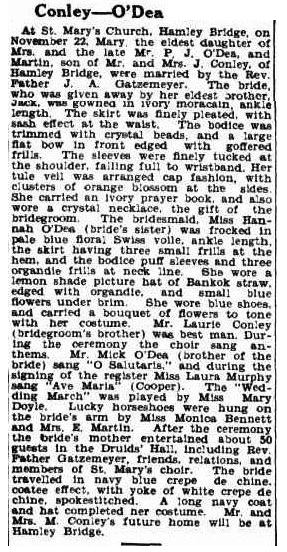 At St. Mary's Church, Hamley Bridge, on November 22, Mary, the eldest daughter of Mrs. and the late Mr. P. J. O'Dea, and Martin, son of Mr. and Mrs. J. Conley, of Hamley Bridge, were married by the Rev. Father J. A. Gatzemeyer.

The bride, who was given away by her eldest brother, Jack, was gowned in ivory moracain, ankle length. The skirt was finely pleated, with sash effect at the waist. The bodice was trimmed with crystal beads, and a large flat bow in front edged with goffered frills. The sleeves were finely tucked at the shoulder, falling full to wristband. Her tulle veil was arranged cap fashion, with clusters of orange blossom at the sides. She carried an ivory prayer book, and also wore a crystal necklace, the gift of the bridegroom.

The bridesmaid, Miss Hannah O'Dea (bride's sister) was frocked in pale blue floral Swiss voile, ankle length, the skirt having three small frills at the hem, and the bodice puff sleeves and three organdie frills at neck line. She wore a lemon shade picture hat of Bankok straw, edged with organdie, and small blue flowers under brim. She wore blue shoes, and carried a bouquet of flowers to tone with her costume.

Mr. Laurie Conley (bridegroom's brother) was best man. During the ceremony the choir sang anthems. Mr. Mick O'Dea (brother of the bride) sang 'O Salutaris,' and during the signing of the register, Miss Laura Murphy sang "Ave Maria" (Cooper). The "Wedding March" was played by Miss Mary Doyle. Lucky horseshoes were hung on the bride's arm by Miss Monica Bennett and Mrs. E. Martin. After the ceremony the bride's mother entertained about 50 guests in the Druids' Hall, Including Rev. Father Gatzemeyer, friends, relations, and members of St. Mary's choir.

Two daughters, Marie Therese (1934 - 2019) and Helen Mary (1936 - 2012) were born in Hamley Bridge. The Conleys moved to Port Lincoln shortly after Helen's birth. Two sons were born in Port Lincoln.  Martin died in December 1990 and Mary's death followed in June 1998. They are buried in the North Shields cemetery in Port Lincoln.
Dressmaking terms

Goffered - a crimped or fluted lace edge or frill sometimes done with a goffering iron. A goffering iron was heated by inserting a poker from the fire. It was then used on collars, cuffs and frills..₄
Spokestitch - HOW TO SPOKESTITCH. To spokestitch by hand, this method is successful:-Take a piece of chintz and tack on to it the two edges which are to be joined, In the exact shape in which it is proposed to join them, and at the desired distance apart. Thread the needle with a long thread of silk or cotton, a double thread of silk twist giving a good effect, or a single thread of knitting silk. Put the needle under the edge of the hem on one side, and bring it out on the right side. Then carry it across and insert it in the upper side of the edge exactly opposite, and bring it out above the thread. Continue to work from side to side, exactly as if doing featherstitching. ₅
This post first appeared on earlieryears.blogspot.com by CRGalvin
By crgalvin at August 13, 2019 1 comment: Links to this post
Email ThisBlogThis!Share to TwitterShare to FacebookShare to Pinterest
Labels: Conley, Mary Ellen O'Dea, O'Dea

A fitting tribute 100 years ago

Grandfather Patrick Joseph O'Dea was one of those victims in August 1919. This tribute appeared in the Pinnaroo and Border Times on 15th August 1919, one week after his death.

"Profound regret and deepest sympathy was expressed throughout the Mallee districts on Friday last, when the sad news of the death of Mr Patrick J. O’Dea, the well-known and highly respected farmer, of Ngallo, became known.

The late Mr O’Dea had been attacked with influenza about three weeks ago, which complaint turned to broncho-pneumonia. On Sunday, August 3rd, he was taken from his home at Ngallo to Nurse Pahl’s Private Hospital at Pinnaroo, and although he rallied a little during last week, he gradually grew worse and died last Friday at about midday.

The deceased was highly popular in the district, and took a leading part in almost every movement for the welfare of Ngallo and district. The late Mr O’Dea for a number of years, occupied a seat as a Councillor for the Shire of Walpeup, and for a period was President of the Walpeup Shire Council, during which time he served the Ratepayers faithfully and well. He was also a fluent speaker and was called upon to voice his sentiments at many public functions, and his demise will be a decided loss to the district.

The late Mr O’Dea was 42 years of age at the time of his death, and leaves a widow and six young children to mourn his loss. The funeral which took place from Mr R. McCabe’s residence, Pinnaroo, on Sunday afternoon, was well attended, the cortege being a lengthy one. Owing to the services of a priest not being available, Mr E. J. Kain, of Ngallo, read the burial service at the graveside. The sympathy of the district is extended to the relatives of deceased in this sad bereavement."

Patrick had been an active member of the community in the region and was regularly mentioned in the local newspaper advocating for the school, the farmers and the church as well as being called upon to chair meetings and propose votes of thanks at many social occasions. One of those six young children was my mother at just 7 years of age, yet throughout her long life she remembered him with great fondness.

R.I. P. Patrick Joseph O'Dea 18 October 1877 - 8 August 1919. Further information about Patrick appears in these earlier posts A victim of the influenza epidemic and Where did they get those names? That post includes his 1907 wedding photo.