When I was young

This genea-meme is a set of questions or prompts about childhood. These questions were proposed by Alona who says:


Like it or not, life today is a whole lot different from when we grew up. And as genealogists and family historians, we are mindful of recording our own history, yet so often it doesn’t happen, and sits in the “I must do that” list.

This has certainly sent me down my memory's lane. I look forward to reading responses from some of my siblings too. As I am the youngest of seven their memories and mine are sure to differ.
**Hint, hint - write this up for your children and grandchildren!**

1. Do you (or your parents) have any memorabilia from when you were a baby? (ie. baby book, lock of hair, first shoes etc.)
This is the earliest photo I have of me at 12 months old. 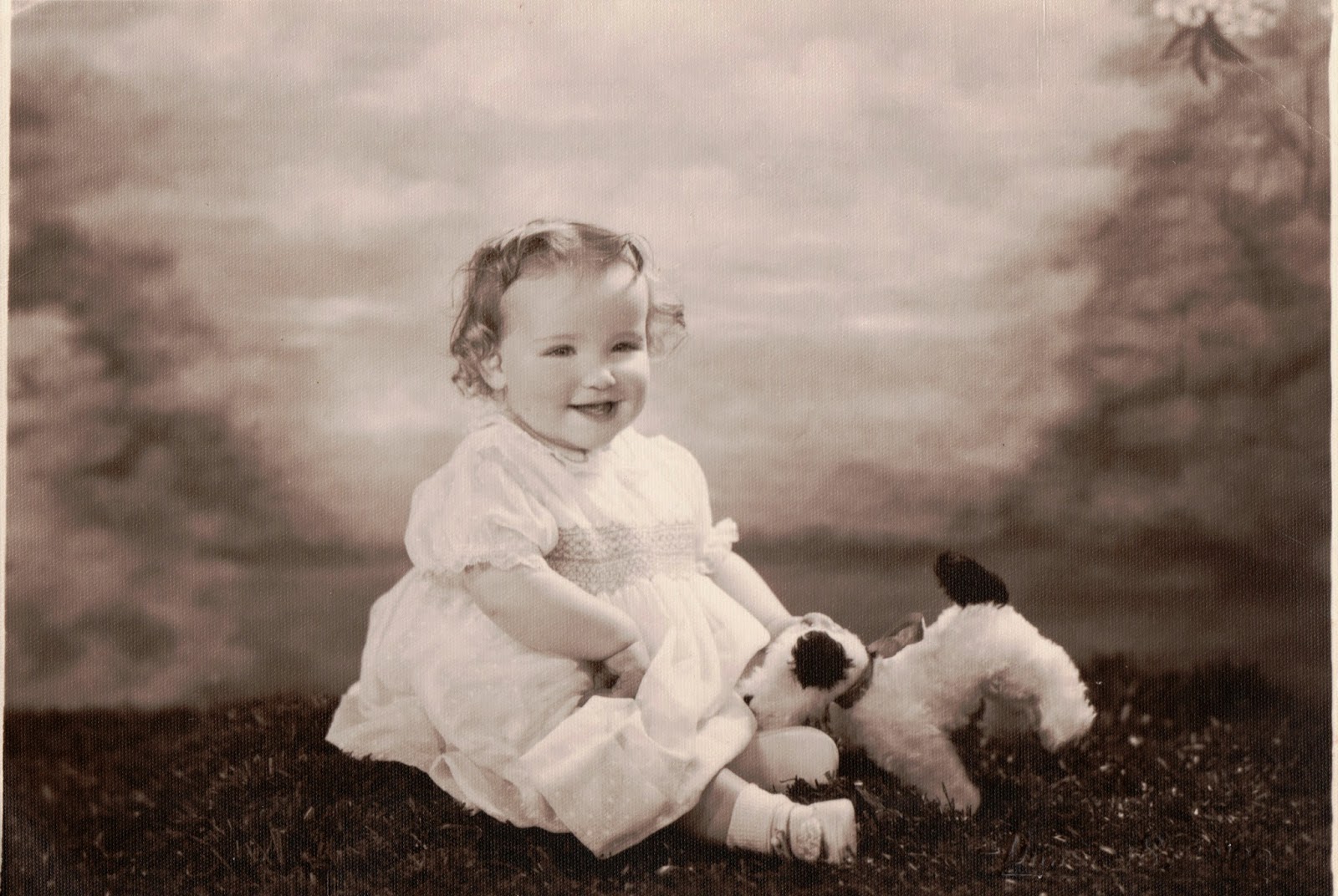 2. Do you know if you were named after anyone?

My parents liked to choose saints' names and as I was born close to the Feast of Our Lady of Mt Carmel, that could have influenced their choice. One of my father's first cousins was named Carmel and she was nursing in the small country hospital where I was born so that may also have been a factor in name choice. I have no idea why my second name is Rosemary.

3. Do you know of any other names your parents might have named you?

I am unaware of any other names they might have chosen.

4. What is your earliest memory?

My earliest memory is of sitting on a step between the dining room and the kitchen in the old farmhouse nursing my Teddy Bear which I had just received as a birthday present. I think I was two or three years old.

5. Did your parent/s (or older siblings) read, sing or tell stories to you? Do you remember any of these?
6. When you were young, do you remember what it was that you wanted to grow up to be?

I always wanted to be a school teacher. Dad had painted a piece of fibro black and fixed it to an outside wall. We had some white chalk so I loved to "play school."
.
7. Did you have a favourite teacher at school?

I loved my first teacher - Miss Thomas. I had her for grades 1-3 as it was a very small 2 teacher school. In high school years I greatly admired my final year English teacher Sister Mary Xavier. She was very well read and opened my horizons to some wonderful literature.

9. What games did playtime involve?

In primary school we played "All over, red rover"  and "Brandy" where the aim was to hit the people in the middle with a tennis ball. Hide and seek was also popular.

Near the house there was a large stand of pepper trees, we built all sorts of pretend cubbies under those trees. We also constructed cubbies in our bedrooms too.

11. What was something you remember from an early family holiday?

We were packed like sardines in our Holden for a trip to the beach. Four in the front, Dad driving, my brother next to him then myself and Mum. In the back were the other five girls, three got to sit back and two forward between the others. No seat belts in those days, sticky hot seats too.

The journey to the beach house at Christies Beach, south of Adelaide took a long time and no doubt much patience on my parents' part. It was a real treat to go to the beach but without sunburn cream or knowledge of its dangers, I do remember suffering from huge blisters on my back.

12. What is a memory from one of your childhood birthdays or Christmas?

Christmas shopping was a huge adventure. We did not have much to spend but would go to Coles in Gawler and trawl the aisles to find gifts for all the siblings. It was tricky to make sure that the others did not see what you were buying. This might only be a packet of Lifesavers which would then be lovingly wrapped and labelled to put under the live Christmas tree that Dad would cut from the scrub paddock. I remember furtively shaking all the parcels to try and work out what they might contain. 6 siblings, 2 parents and Uncle Joe - there were a lot of presents under our tree.

Birthdays always meant a two tiered sponge cake light as air, cooked by Mum. This was filled with a smear of homemade jam and freshly whipped cream, real cream from our cow's milk. Mmm, delicious!


13. What childhood injuries do you remember?
14. What was your first pet?

We had a lot of cats to keep the mice at bay. The first cat that "belonged" to me was Norman, a large grey cat who would happily be carried wrapped around my neck. It is possible that I had a pet lamb before Norman, as every year there were motherless lambs that we named and bottle fed.
15. Did your grandparents, or older relatives tell you stories of “when I was young ..?”

I had very little to do with older relatives other than one uncle as we lived on a farm not near relatives. My only living grandmother visited maybe once or twice a year at the most, as she also lived what was then considered a long distance away. My parents did tell stories of their courtship riding in the buggy, and Dad and Uncle Joe told of riding the horse to school.

16. What was entertainment when you were young?

Singing around the piano, playing Scrabble and Monoploy, playing cards and reading.

17. Do you remember what it was it like when your family got a new fangled invention? (ie. telephone, TV, VCR, microwave, computer?) Did your family have a TV? Was it b&w or colour? How many channels did you get?

I was in Year 7 at primary school when we got our first black and white TV and was very keen to show the two sisters nearest to me in age, when they came home from boarding school. I think there were three channels, ABC, Channel Nine and Channel Seven.

18. Did your family move house when you were young? Do you remember it?

19. Was your family involved in any natural disasters happening during your childhood (ie.fire, flood, cyclone, earthquake etc)

My father, brother and uncle were often called out to fight fires. In early years Dad and Uncle Joe would drench wheat bags to put over their heads to protect them from fire. They beat the grass fires with wet bags and knapsacks. I was lucky to never have been involved.

20. Is there any particular music that when you hear it, sparks a childhood memory?

Danny Boy was one of my mother's favourite songs so it makes me think of her in her apron doing housework but singing at the same time.

21. What is something that an older family member taught you to do?

My mother taught me to sew, cook, knit and crochet and I imagine I had a lot of help from my siblings with all of those things. My brother taught me about humour in so many ways. In university years I lived with a sister who really taught me how to sew.

22. What are brands that you remember from when you were a kid?
23. Did you used to collect anything? (ie. rocks, shells, stickers … etc.)

At one stage I had a stamp collection but making doll's clothes was more interesting.

Autograph books were popular and I collected the autographs of friends and family. Mine had pastel coloured pages and was about 5 x 3 ins. I seem to remember a brown cover like this one pictured.

So many memories, I had a very happy childhood. Winter's nights, protected from the cold and wet, we did like to sit around the open fire in the lounge room knitting or playing Scrabble.

Thanks Alona for the prompts.

This post first appeared on Earlier Years at http://earlieryears.blogspot.com/2015/04/when-i-was-young.html
By crgalvin at April 06, 2015
Email ThisBlogThis!Share to TwitterShare to FacebookShare to Pinterest
Labels: Carmel Horgan, Childhood