The approaching wedding of a nephew with the surname Honner had me scurrying to Trove to see if there were any reports of the details of weddings of his ancestors. His great grandparents John Aloysius Honner and Mary Langford were married in 1893 in Maitland, South Australia, and the newspapers reveal a wealth of information about the lives of this couple.

The Honner family had arrived on Yorke Peninsula in 1875 when John was about 13 as this extract from an account about the prosperity of Maitland in 1952 records.


There were some epic pioneering stories. Richard Honner, of Yankalilla, who had seven sons, first took up land at Brentwood. Edward, aged 12, and John, 13, each drove a four - bullock team from the old home, through Adelaide, to the new property. [a distance of approx 280 km] For the feat, each was presented with an English lever and key watch. Mr. R. C. Honner, of Arthurton, now has one and Mr. R. F. Honner the other, and both still go. Mr. Edward Honner, now 88, is living in retirement in Maitland.

The 1943 account of the celebrations held for their golden wedding anniversary add more detail to the story. 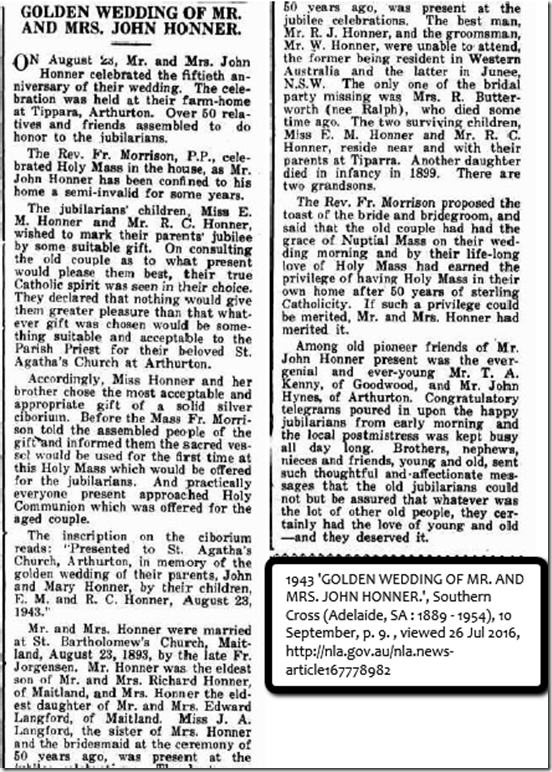 More details about this family's life were found in the obituary later that year when John died in October. 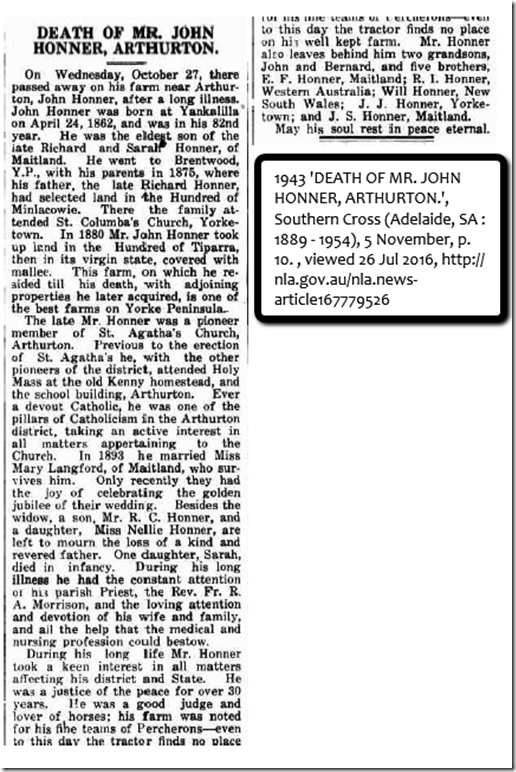 Mary (Langford) Honner outlived her husband by 13 years and died in 1956. They are both buried in St Agatha’s Catholic cemetery, in Arthurton.


The next generation back

Some details from the papers about my nephews’ great-great grandparents Richard and Sarah Honner  who married in 1856, can be found in these articles. The first is the account of their diamond wedding celebrating 60 years. The fuzzy picture below was taken on that occasion in 1916. The next two articles are obituaries which contain extensive details about their lives and the lives of their children.

My nephew's parents celebrated their 50th wedding anniversary this year so he has many years to catch up on to emulate those who came before him. Best wishes Richard and Rebecca.

at July 26, 2016
Email ThisBlogThis!Share to TwitterShare to FacebookShare to Pinterest
Labels: Trove Tuesday