Where did they get those names?

This photo of my maternal grandparents in 1907 displays a wedding party of siblings of both the bride and groom. The attendants ranged in age from 41 to 16 years. It also provides some clues to the names that the bridal couple would give to their children in the years that followed. 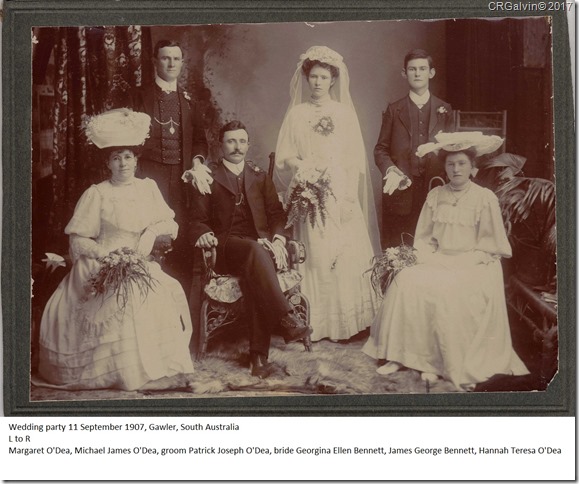 The eldest O’Dea sibling, Bridget Elizabeth born in 1864, had married Coleman Kain in 18911 and by the time this marriage took place in September of 1907 she was 43 and had given birth to seven children.
Next in line Margaret, was born in 1866 followed by Hannah Teresa in 1869. In 1870 son and heir John Francis Benedict arrived. Michael was born in 1873 followed by Mary Anne in 1875. Patrick Joseph entered the world in October of 1877. Tragedy struck in  May 1878 when both Michael now 5, and Mary Anne 3, died within 12 days of each other2. The next son born in 1881 was also given the name Michael James.
John Francis Benedict O’Dea born in 1870, had led a troubled early life and was committed to the Parkside Asylum where he died at the age of 33 in January of 19033. Margaret and Hannah remained unmarried and cared for their parents. Michael James married James George Bennett’s widow Ethel in 19184.

Georgina’s only sister Mary Olive had married Daniel Casaretto in October of 19065 and their first child, Catherine Mary6 was only 2 months old at the time of this wedding. Georgina’s youngest brother Albert Victor Ronald7 known as Ronald was only 5 years old. Young brother James8 was her supporting sibling in this otherwise older O’Dea wedding party. He had just turned 16.
In the following 11 years Georgina and Patrick O’Dea had a family of six children. They used a variety of family names as seen here.

Popular family names from the past wax and wane through the years. A new crop of Hannahs appear and two of the younger members of the extended family now bear the name brought down through their great-great-grandfather’s sister – Hannah Teresa.

Anyone for an Olive? My mother Hannah Olive O’Dea really disliked her middle name, (initials HOOD until she became Horgan, HOH) but when we view this historical context of naming patterns, it is clear that the name Olive was important to her mother Georgina.