The family rally around 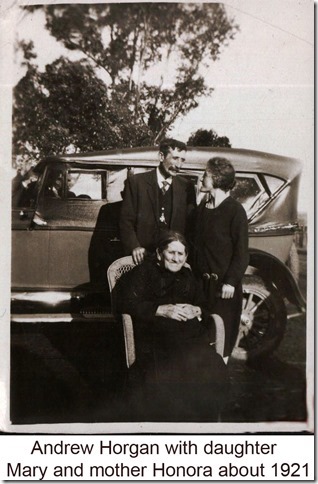 What a challenge Honora Horgan faced in 1883. Her husband John Horgan died at 48 years old leaving her at age 43 on their farm at Linwood, South Australia with six children. In her own grief how did she manage to console her children? Thomas was 16, Andrew 14, Catherine 11, John 8, Johanna 7 and Nora 5.  The land was in her husband’s name and while a Married Women’s Property Bill was currently before the Legislative Assembly it did not come into effect until 1884.1

How would she manage? Apart from the heavy work of farming required, who would handle the business matters? There were still meals to be cooked, vegetables to tend and livestock needing attention. Her boys were accustomed to farm work but really too young to take on the management tasks needed.

Honora’s brother, David Joseph O’Leary lived nearby on a farm at Stockport. He had lost his young wife Mary Johanna, in an accident in 18782 when his two children were only toddlers. It is not hard to imagine that he would then have turned to his sister Honora for her assistance and support. Now it was his turn to lend a helping hand.

John Horgan’s younger brother Daniel, together with his wife Julia and their five young children were living on a farm at Taylor’s Gap near Tarlee. His older sister Johanna, who had married John Hogan. also lived on a neighbouring farm. Older brother Thomas had taken up land further north in South Australia at Mintaro. It was time for the family to rally around Honora. Business matters were handled by the local solicitor in Kapunda who by October of 1883 advertised as shown in this newspaper clipping.3

So we see three close family members acting as executors; David O’Leary, John Hogan and Daniel Horgan. These three names then appear again on the land titles as they took over the management of the mortgage responsibilities. Probate was settled at £216 10s in October 1883. 4

Many years of hard work followed with all her children remaining and working with Honora on the property. Drought years such as that of 1891 made life difficult. The crops that had been sown in hard ground withered away with lack of rain. Some farmers had to avoid seeding altogether as the ground was too hard.5

Honora and her family were devout members of the Catholic faith. Each Sunday they travelled to attend Mass at either Saints John and Paul Church at Tarlee which was the nearest, or St Mary’s in Hamley Bridge. The extreme heat of summer and the depths of a cold rainy winter saw them dressed in Sunday best, those long layers of hot clothing of the day, travelling 5 or 9 miles each way either in an open top buggy or a covered wagon. What delight they must have shared after the first purchase of a car in the early 1920s for more comfortable and covered travel. Tarlee Catholic Church documents show that she and her family contributed generously to Christmas, Easter and other special appeals.

When Honora was 66, second son Andrew married and moved to his new wife’s (Elizabeth Smyth) property at Alma. At age 69 she saw her youngest daughter Nora marry John McInerney.  Grandchildren brought new pleasures to her and the adult unmarried members of her family. Visits to their grandmother, aunts and uncles were a feature of school holidays for the grandchildren.  By the time she was 80 she had three Horgan and eight McInerney grandchildren and is seen in the photo above with son Andrew and eldest grand-daughter Hanora Mary Horgan.

At age 86 she was still living on the farm at Linwood with unmarried sons Thomas and John (known as Jack) and daughters Catherine (Kate) and Johanna who were also unmarried. Perhaps the loss of their father all those years ago and the subsequent toil to retain the farm had caused them to stay with their mother rather than marry. Johanna’s health was poor and at the age of 49 after much suffering she died. So in September of 1926 at St John’s, near Kapunda, Honora buried her daughter with her beloved husband. Much sympathy was extended to the family as Johanna was well known and loved as attested to in several obituaries published after her death.6

Honora’s health was fading with age and on September 25 in 1927 she died at home on her farm at Linwood. So ended a life full of joys and struggles that had begun long ago and far away in that green isle over the seas. 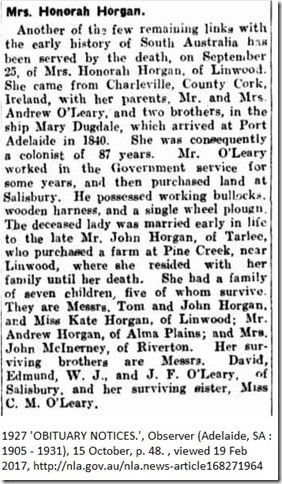 Mrs. Honorah Horgan.
Another of the few remaining links with the early history of South Australia has been served by the death, on September 25, of Mrs. Honorah Horgan, of Linwood. She came from Charleville, County Cork, Ireland, with her parents, Mr. and Mrs. Andrew O'Leary, and two brothers, in the ship Mary Dugdale, which arrived at Port Adelaide in 1840. She was consequently a colonist of 87 years. Mr. O'Leary worked in the Government service for some years, and then purchased land at Salisbury. He possessed working bullocks, wooden harness, and a single wheel plough.

The deceased lady was married early in life to the late Mr. John Horgan, of Tarlee, who purchased a farm at Pine Creek, near Linwood, where she resided with her family until her death. She had a family of seven children, five of whom survive.

Honora was buried at St Johns near Kapunda with her husband and daughter. This second obituary below, published in the Southern Cross, adds further details.


In the death of Mrs. Honora Horgan, who died at her residence, Linwood, on September 20, we have lost one who, as a practical Catholic, as a mother, and as a friend, had few superiors.

She was the eldest daughter of the late Mr. Andrew O'Leary, who was one of the earliest settlers on the Para Plains.

With his wife and three children, one of whom, was the late Mrs. Horgan, he came from Bullivant, County Cork, where she was born on December 7, 1839. They arrived in Port Adelaide in the ship Mary Dugdale, in 1840, and Mr. O'Leary lived in Adelaide and Thebarton for some years, until he saved sufficient to purchase a section of land at Salisbury, with some working bullocks, and the primitive implements in use then. When a young girl Mrs. Horgan knew the hardships, and the pleasures also, of an occasional trip to Adelaide in a bullock dray, and though she loved to enjoy the comfort of a fastly driven motor car, there was a halo around the old bullock dray that lingered lovingly in her memory. When quite young she married Mr. John Horgan and moved to Linwood, where she lived up to the time of her death.

In the early days Mass was celebrated at Navan, Pinkerton Plains, and Kapunda; and the nearest of these was twelve miles distant, and she was no fair weather Christian, for on alternate Sundays during the vigors of winter or the scorching heat of summer, she went these long miles to Mass, and always fasting, for her devotion to the Blessed Sacrament was intense. Her home was a model one, where religion was the basis of all action and an example of what a Catholic home should be.

After the death of her husband, her family being still young, she had a long, hard struggle, but helped valiantly by her children she surmounted, the difficulties, and spent her declining days as the idol of her family, beloved by her neighbors, honored by her acquaintances, and blessed for her charity and big hearted hospitality. During her illness she had the untiring attention of the Rev Father Brady and Father O'Hara, of Riverton.

Her funeral was largely attended, and her remains interred at St. John's, near Kapunda, the family burying place, where Rev. Father Gurry, of Kapunda, performed the last rites assisted by the Right Rev. Monsignor Maher, and the Revs. Fr. Brady, Fr. OHara, Fr. Denny, Fr. Horgan and Fr. O'Sullivan. R.I.P.8

In October 1927 her family expressed their thanks with this newspaper bereavement notice:

HORGAN.—The FAMILY of the late Mrs. HANORA HORGAN are deeply GRATEFUL to all Relatives, Friends and Neighbours for kindness and sympathy in their sad bereavement.9

This post first appeared at http://earlieryears.blogspot.com/2017/02/the-family-rally-around.html
By crgalvin at February 21, 2017
Email ThisBlogThis!Share to TwitterShare to FacebookShare to Pinterest
Labels: Honora Horgan, Horgan