Descendants of Johanna Fitzgerald and Thomas Horgan
Above is a visual representation of the Horgan grandchildren all born in South Australia after the widowed Johanna Horgan emigrated from Ireland in 1852 with her three young sons John, Thomas and Daniel. She was later joined by her older daughter Johanna.
I am grateful to Andrew Redfern for the idea of representing families in this visual manner.
A chart like this can be produced in a wide range of programs such as Word, Powerpoint,  or Google slides. I chose to make mine in Canva using their simple tools to duplicate and tidy the person icons in the table.

Not all of the 31 grandchildren represented above went on to have their own children. Some died at a young age, several women remained unmarried and looked after parents as they aged, 2 married couples had no children, 2 of the men became priests and one woman became a nun.
Of those grandchildren who did marry, here are the numbers of offspring from those unions.
Johanna Horgan and John Hogan's offspring had 23 children: - 6 O’Sullivans, 6 Hogans, 5 O’Briens, and 6 Kitschkes
John Horgan and Hanora O'Leary's offspring had 11 children : - 3 Horgans and 8 McInerneys
Thomas Horgan and Mary Caroll's offspring had 30 children: -25 Horgans, 5 Slatterys
Daniel Horgan and Julia Evans offspring had 28 children: - 5 Slatterys and 23 Horgans
Numbers and dates, interesting but somewhat boring. Thanks Andrew for visual idea.
I am a descendant of John and Hanora Horgan. If you are a descendant of any of these 94 great grandchildren I would be delighted to hear from you.
This post first appeared on earlieryears.blogspot.com by CRGalvin
at September 04, 2022
Email ThisBlogThis!Share to TwitterShare to FacebookShare to Pinterest
Labels: Horgan 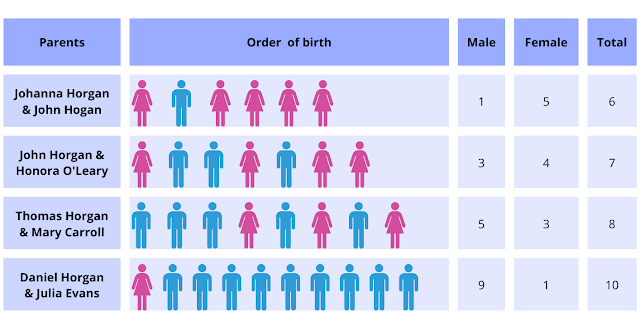