What happened to George? 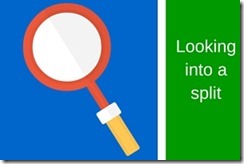 Last week I wrote about great-grandparents George Bennett and Bridget Helen Kelly Following that post, I posed a query on the South Australia Genealogy Facebook group seeking advice on how to uncover death details for George. I was unable to determine, (via my subscription) which one or indeed whether any of the Georges listed in the SA Genealogy database was him. Several people jumped in to help and thanks to John Glistak’s eagle eye, I've now retrieved several articles from Trove that reveal more of this couple's life story.

After several moves, the birth of four, possibly five children and the marriage of the two daughters, George and Bridget's marriage of 28 years must have been under some strain. George was now about 53 and Bridget 52 years old. It appears that in 1915 George had left Bridget and was summonsed to court to pay maintenance. 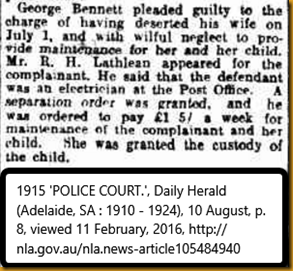 George Bennett pleaded guilty to the charge of having deserted his wife on July 1 and with wilful neglect to provide maintenance for her and her child. Mr. R. H. Lathlean appeared for the complainant. He said that the defendant was an electrician at the Post Office. A separation order was granted, and he was ordered to pay £1 5/ a week for maintenance of the complainant and her child. She was granted the custody of the child.

From this, I gleaned his occupation as an electrician working for the Post Office and confirmed that the youngest son was still living with his mother, One month later the court is the scene of another ruling. 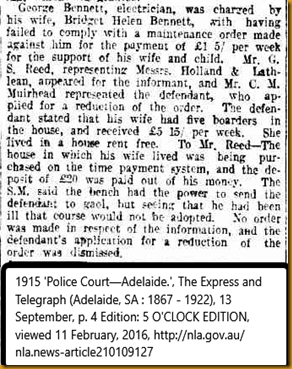 George Bennett, electrician, was charged by his wife, Bridget Helen Bennett, with having failed to comply with a maintenance order made against him for the payment of £1 5/ per week for the support of his wife and child. Mr. G. S. Reed, representing Messrs. Holland & Lathlean, appeared for the informant, and Mr. C. M. Muirhead represented the defendant, who applied for a reduction of the order.
The defendant stated that his wife had five boarders in the house, and received £5 15/ per week. She lived in a house rent free. To Mr. Reed-The house in which his wife lived was being purchased on the time payment system, and the deposit of £20 was paid out of his money. The S.M. said the bench had the power to send the defendant to gaol, but seeing that he had been ill that course would not be adopted. No order was made in respect of the information, and the defendant's application for a reduction of the order was dismissed.


Once more in court

Did this settle the matter? It seems not to have been resolved with George still not paying maintenance. The third court appearance in October 1915 had more severe consequences for non-compliance. 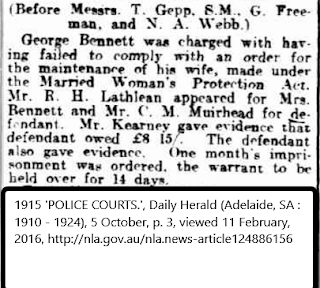 George Bennett was charged with having failed to comply with an order for the maintenance of his wife, made under the Married Woman's Protection Act. Mr. E. H. Lathlean appeared for Mrs. Bennett and Mr. C. M. Muirhead for defendant. Mr. Kearney gave evidence that defendant owed £8 15/. The defendant also gave evidence. One month's imprisonment was ordered, the warrant to be held over for 14 days.

Did he serve the time or pay the costs? After reading these accounts, I now have a better understanding of why it has been difficult to trace him. My quest to find his date of death continues, but more importantly, some of the details of their story have been found.
By crgalvin at February 16, 2016
Email ThisBlogThis!Share to TwitterShare to FacebookShare to Pinterest
Labels: Bridget Helen Kelly, George Bennett