A building with memories 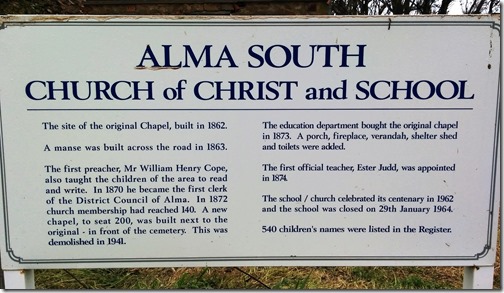 This sign outside the now abandoned Alma South School in South Australia holds few hints to the role it played in the life of my father and his siblings one hundred years ago.

Edward John Horgan and his sister Honora Mary were enrolled at this little one room school on the 28th April 1914. He was 5 yrs 11 months old and she was 7 yrs 4 months. The school register shows that neither had attended school before and that they lived three miles away. The distance from the school probably explains why Honora Mary had not started at a younger age. Now there were two children of school age, transport would be found for them.

This extract from the Alma South school register held at State Records SA details their birth dates, father’s occupation and shows they both started in J, the first grade in the school. Eddie completed Junior in 1915 while his elder sister moved up a grade.

This photo shows Eddie with his sister outside the school on their horse Beaver, accompanied by local children Lindsay McKenzie and Beryl Watts on the other two horses. There is no saddle on Beaver so a slow and steady progress would have been the order of the day. There were only 23 children on the register in 1914 with the average daily attendance shown as 16. As many would have ridden horses to school, one can only imagine the reluctance of some to set out on cold, wet mornings. 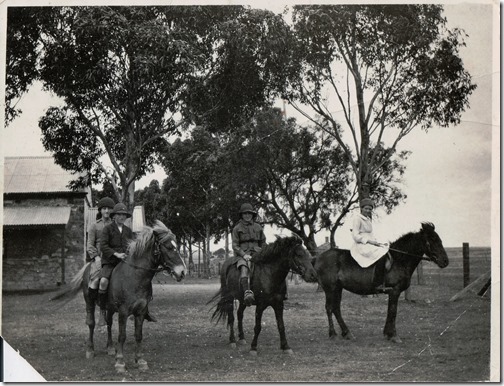 To find out more about school days at Alma South I turned to Trove where Nora Mary, as she liked to be known then, wrote in 1916:
We had Australia Day in Alma on July 26. The Alma South school children were dressed up to represent different nations. I was an Irish girl. …(she continues) I am in the second class at school. The teacher's name is Miss Dubois. (1)
Ellen M J DuBois had been appointed to Alma South school in 1911 and had commenced there in April of that year. She was still there in 1928.

At the beginning of 1917 the youngest Horgan child, Joseph, was enrolled at the school at the age of 6 years 9 months. I wonder if the three of them shared the ride on Beaver or if they took turns and walked some of the way.

In February of 1917 Nora Mary wrote of school days again to the Southern Cross newspaper:
We are busy at school knitting for soldiers. Both of us passed. Eddie is in the third grade. I am in the fifth grade. My little brother Joseph is going to school now. He is a pet of the scholars. (2) 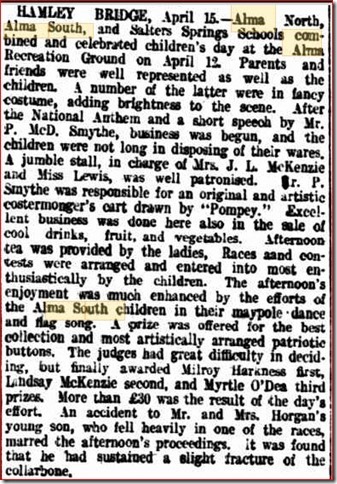 In April of 1918 a report on a school picnic for children’s day held jointly with the Alma North and Salter Springs schools, describes a variety of activities. Miss Du Bois had obviously done a good job managing to get a group of youngsters entwined in a Maypole dance.

At the end of this report it is noted:
An accident to Mr. and Mrs. Horgan's young son, who fell heavily in one of the races, marred the afternoon's proceedings. It was found that he had sustained a slight fracture of the collarbone. (3)

Whether this was Joe or Eddie is not known but it certainly would have been a painful ride home in the buggy over rough roads. Many of the dirt roads in the locale of their old home can still provide a somewhat bumpy ride in 2016. Several school picnics and gatherings were recorded in the papers of the times.

Another glance of life at school is provided by Nora Mary in November of 1918.

Our examination will be next month. I hope to pass into the VII. Grade. Isn't it lovely to think that the war is over at last? A lady came to our school on Wednesday to teach us how to spin wool. We will have five weeks' holiday at Christmas time. We have had three days' holiday this week in honour of peace. (4)
She spent another two years at the school passing what was known as the Qualifying Certificate at the end of Grade Seven in 1920. Eddie and Joe were still recorded as attending Alma South in 1921. There were only twenty-six to thirty children attending the school in those years between 1914 and 1921.

The school register I examined was used from 1883 until December 1921. The instructions for filling it in included a note at the bottom of the first page that read:

Should a new register be required before the old one is finished, it may be obtained with the permission of the Inspector on payment of 2s.6d.

This was written before 1883 when this register of pupils was commenced. One hopes the teacher did not have to pay for a new register 39 years later! State Archives notes that the location of admission registers for the school at Alma South after this date is unknown. (5)

It is sad to see the state of the building now as time and weather wreak their damage. I would like to think that my father and his siblings had fond memories of this small school and the friends made therein. 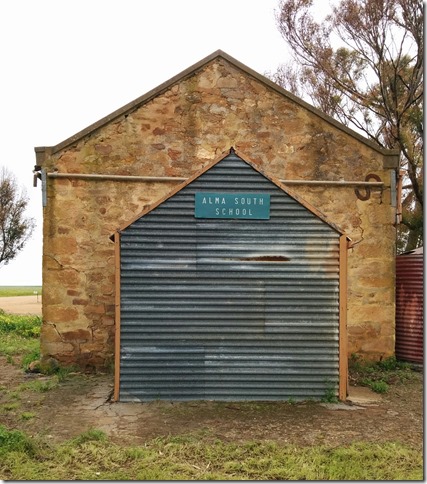 View from outside – September 2016 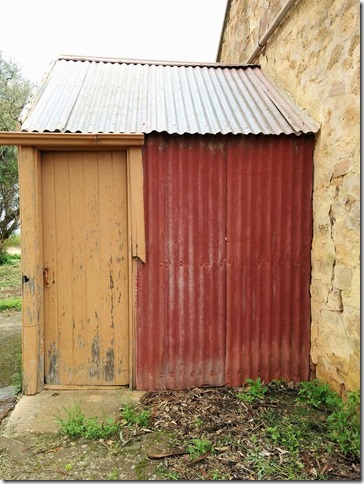 Entry via the porch - inside the building the remains of a chalkboard adorn one wall. The roof timbers appear to be in good condition. 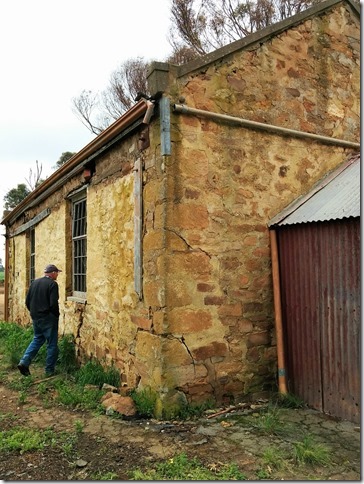 View of the side of school building showing significant deterioration

An interesting article in Weekend Notes has more information on Alma and Salter Springs as well as some other small towns in this region of South Australia.