Where and when did he die? Patrick O’Dea migrated from County Clare, Ireland to South Australia in 1854 aboard the barque “Time and Truth”. He was accompanied by his wife Mary, sons Thomas and John and daughters Mary and Margaret.

Two hundred and forty one emigrants were aboard when the ship left Plymouth on January 11th 1854. There were 80 adult males, 88 females, 32 boys and 41 girls. During the voyage there were 4 births and 6 deaths. The captain’s report at the conclusion of the 4 month voyage on the 8th May 1854 provides some interesting insights into life aboard. He reports the conduct of the immigrants as very good with the only corporal punishment being “two boys put in irons for an hour for fighting.” General satisfaction was expressed with all aspects of the suitability of accommodation on board but he reported


The fresh potatoes failing at the end of 12 days after sailing. The quantity placed on board of the preserved potatoes proved insufficient to last the voyage. In other respects the provisions and water were ample and good.

In regard to the school provided on board for the children, he recorded that about 27 boys and 14 girls had attended, Margaret O’Dea at 8 years old may have been one of these girls.


The results of the tuition were exceedingly satisfactory. Several of the boys who could not form a letter or spell a word when they commenced, being able to write fairly and read fluently by the end of the voyage.

He also wrote to the Land and Emigration Commissioners to present the emigrants’ complaints about the depot at Plymouth where they were housed before departure. It appears there were several shady operators who sought to take advantage of the emigrants by promising certain services on the payment of extra fees. The complaints ranged from being compelled to purchase unnecessary goods, payment for sleeping at the Depot and payment for unfulfilled promises of “situations to be obtained”. Amongst the list of complainants was Patrick O’Dea who stated:


I, Patrick O’Dea was compelled to buy a blue shirt that I had no use for to the amount of 5s.6d. at the Plymouth Depot.

What I know of their early years has been gleaned from their son John recalling their early days in South Australia on the occasion of his 50th wedding anniversary in 1913. It appears they lived near Kapunda for 8 years working as carters before obtaining land.

The early land records in South Australia yield details of land rented and purchased by several O’Dea males. The common practice of using similar names in families (Patrick, Thomas and John) makes it difficult to determine which land titles belong to which O’Dea family.

From his own recollections, son John and his family were farming at Pinkerton Plains by 1863. John was married in August of 1863 and took his bride to Pinkerton Plains. Here in September of 1864, Patrick lists his interest in blocks 359 and 360. 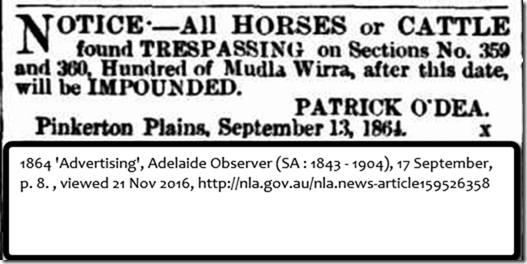 The first mention of the name Patrick O’Dea occurs in the land records with the transfer of a block of land in the Hundred of Mudla Wirra in 1863. Block 274 had been leased from John Coleman Dixon in February of 1863 for 10 pounds per annum for 5 years with the right of purchase for 80 pounds. In 1866 this title records the payment of the 80 pounds and the transfer of the title.

There is no easily found or obtained death certificate for my gt-gt-grandfather Patrick. No reference is made to him in the official registers of deaths. This certificate of title for block 300 in the the Hundred of Mudla Wirra, lists Patrick, Thomas and John “all of Pinkerton Plains farmers” as joint holders of this 81 acre block. Could it be that the note below on the certificate of title refers to my Patrick O’Dea?

I am pursuing several avenues of interest to see if this Declaration of Death can be found and some of the mystery solved. If you an O’Dea descendant with more information I would be pleased to hear from you.