Bulls in the paddock, baking and bicycling

Was it fearsome? Probably not.

Each day we walked about 300 metres out to a main road to catch the school bus. Often there was a bull in the paddock next to the dirt track. I remember always being frightened that he would charge.There was a fence between us and the bull, so my fears were probably unfounded but I always walked along the other side of the track, preferably with a sibling between me and the bull. If he was grazing near the fence, we ran to get past him as quickly as possible.

One of the first things I learnt to cook was a batch of biscuits. My mother baked both cakes and biscuits weekly to cater for school lunches, for morning and afternoon teas, for paddock work and to have a supply on hand for any visitors. Chocolate Crackles and Honey cornflake crackles were easy to make for a beginner. Shearing time meant increased baking to feed the extra men on site. Cakes and biscuits were taken over to the shed along with a big pot of tea in the middle of the morning and again in the afternoon.

Mum liked any variety of biscuit made with peanuts. Ginger was also a favourite, so here in her handwriting, is her recipe for Crisp Ginger Biscuits. 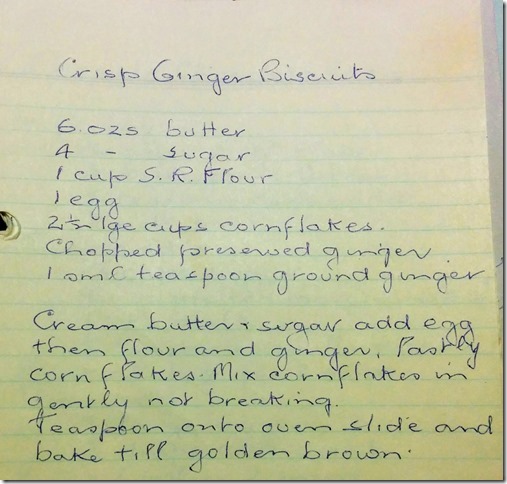 A bicycle for the three youngest

One Christmas about 1957 my sisters and I became the proud owners of a blue bicycle. The dirt track was rough so spills were common as we learnt to ride.  One day when it was my turn I rode without any shoes. The subsequent gravel rash and bleeding toes ensured I quickly learnt the necessity of adequate footwear. Unfortunately punctures were common so I suspect we had limited rides.

Next C – Cars for carting
By crgalvin at April 03, 2017
Email ThisBlogThis!Share to TwitterShare to FacebookShare to Pinterest
Labels: A-Z challenge, farm life