Remember those stinging nettles? Just when we thought to find a fine place to play in the grass, the sting stung, painfully and irritatingly. Often when climbing through a fence, concentrating carefully on avoiding the strand of barbed wire that ran across the top, I stepped straight into a patch of those nettles. A pain for the child and a pest to the farmer.

The cure-all in our house for stings, rashes and mosquito bites was calamine lotion. It came in a large brown glass bottle. This had to be shaken and agitated before opening otherwise a thin watery pink trickle was all that appeared. It dried hard and crusty on the skin but I remember well many days covered in blotches of pink calamine lotion.
Never have I tried nettle soup. Nettle anyone?

No, not the human kind. The mean, munch through anything mice, the silent slithery snakes.

Just picture that horrible grey mass of mice when one uncovered a nest of the pests. The smell of a mice infestation has left me with a loathing. I have no understanding of those who allow their children to have them as pets. Mice would infest every nook and cranny, nibble and destroy everything in their way.

Snakes and small children, not a good mix. A long, rigid wire hung over the back fence to be grabbed when a snake invaded the house yard. A swift swing down with that wire did the job. After we moved to the new house, the old house was a great place to play. One day when I was happily playing down there, I heard a swishing noise. I thought it was one of my sisters or my mother sweeping the old linoleum in the next room. No, a snake was sliding across that floor. I shut the door, turned and hid as there was no way out except across that old dining room. As I know now, snakes go their own way if left alone, but that day I was frightened.

It was not called netball then, it was called basketball. We played in the local Tarlee teams on Saturday afternoons against teams from nearby towns. Boys played football, Australian Rules, in the same towns.

The basketball courts had a bitumen surface so many skinned knees and hands were not uncommon at the end of the game. We wore uniforms with box pleats that fell from a square yoke. Underneath that we wore a button up blouse. A girdle tied around the waist stopped the uniform from flying all over the place. Those girdles were like a plaited silky rope with a tassel on each end. On Saturday mornings it would be a rush to get all the uniforms and blouses ironed before the matches. This was well before stretch materials made sportswear comfortable.

Next O - Oranges in the orchard and some offal
at April 17, 2017
Email ThisBlogThis!Share to TwitterShare to FacebookShare to Pinterest
Labels: A-Z challenge, farm life

This week MyHeritage has released a new feature that brings animation to old photos. Here are my maternal gt. gt. grandparents, John O'... 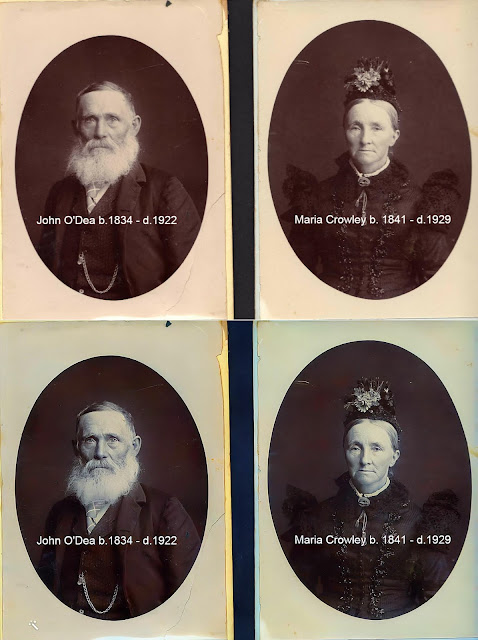