In our backyard at the old farm house, Dad had erected an old wagon wheel on a pole, it was our hurdy-gurdy. We had a lot of fun spinning each other around. There was no such thing as a comfortable seat, just sit on a spoke or the metal ring, grab hold and make sure one's legs were not touching the ground. We also had a home-made swing under the pepper trees. It was a straight, hard piece of wood attached by chains to an upper tree branch. 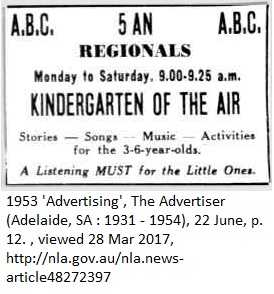 As I was the youngest of seven children most of my memories involve trailing around with others and playing whatever games were on the go. Once all my siblings were at school, I had the solitary pleasure of sitting in front of the large cabinet radio and listening to Kindergarten of the Air.  This 25-minute program aimed at children from 3-6 years of age was broadcast Monday to Saturday at 9 am. This was before television and was my experience of the world beyond the farm gate.

When siblings returned home from school I was always ready to pester them to play “school” with me. By the time I started school at five and a half years old, I was familiar with the playground and classrooms having been there with my mother on the days of Mothers’ Meetings which were held about once a month. In 1956, the school at Tarlee had two classrooms. Miss Dora Thomas was in one room with grades one, two and three and Mr Payne in the other room with grades four to seven. I was a quick learner having had the advantage of learning from elder siblings and my mother.

One school activity clearly remembered was making cushions from the hessian sugar bags. We counted six rows up, took a stitch then six rows down and across for the next stitch in brightly coloured wool so causing a zig-zag pattern to be made. After two or three rows a new colour was added. After four colours had been added the pattern was repeated. When the piece was completed after a term’s sewing, these masterpieces went home for the mothers of the district to make them into cushions. I recall our lounge room having at least three of these creations at one time. It is probably just as well that no photo survives!

Easter was a most solemn time of year. In the weeks of Lent, we were encouraged to “make a sacrifice” this usually involved giving up lollies and sweets for six weeks. We really looked forward to breaking that fast on Easter morning. No chocolate eggs or treats before then.
On Easter weekend we went to church three times. On Thursday evening there was the solemn Mass, Good Friday afternoon “The Stations of the Cross” service then Easter Sunday morning the celebratory Mass.

Our roast dinner was in the middle of the day but by then, as young children, we had consumed our Easter egg, usually one not many. The Easter eggs that lasted the longest were the hard as a rock sugar ones. I’m sure these probably caused more damage to our teeth than the enjoyment warranted.