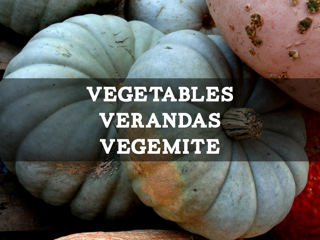 We had a large vegetable garden with beans, carrots, turnips, swedes, onions, potatoes and pumpkins. In summer there were watermelons, strawberries, tomatoes, beetroot and lettuce. As the pumpkin vine spread, we would look for those that grew hidden under the large leaves. The pumpkins were a large blue variety that kept well for months on end. They were stored on the tank stand just at the edge of the back veranda. Onions and potatoes were picked and bagged and stored underneath the concrete tank stand in the cool dark space. Thinning the carrots was a favourite task as we got to eat the tiny sweet ones fresh from the garden. We ate potatoes and pumpkin and a third vegetable with our meat most nights. Vegetable soups warmed our winters.

Our house had three verandas. At the front of the house was the red polished concrete veranda surrounded by a low wall ideal for seating. Mum was very proud of her front veranda and the job of polishing it usually fell to her children. It was a down on the hands and knees job for many years before the advent of an upright electric polisher. She was happy for us to slide up and down on the veranda on rags as this kept it shiny. In later years, three of my sisters left the house through the front door for their weddings and had photos taken on that veranda.

The back and side verandas were the functional spaces. At the back door, an old cedar sofa was the ideal place to sit and remove muddy boots and shoes. Cats and dogs made that sofa their home too. Easy access to the wood box, the water heater, and an old meat safe meant this was a functional space. It was also a good place to play in inclement weather as it continued around to a side veranda that bordered the tennis court. Two lines stretched across the side veranda for hanging the washing in wet weather. In hot weather, water was cooled by evaporation from a canvas water bag, it swung on the line under the shade of the veranda. Another lidded box seat at the end of the side veranda had tennis racquets and the net stored in it.

Many Australian children grow up eating vegemite on their toast or in their sandwiches. We were no exception and often on meatless Fridays we had vegemite sandwiches for school lunches. Vegemite is a rich, strongly flavoured yeast extract spread.

Each year in August we went to the Royal Adelaide Show for our big day out. One year I got a show bag that had a small jar of honey and a small jar of vegemite along with promotional material. I had not seen tiny jars like this and was excited to be allowed to use them at breakfast time. Each morning I would find the jars were once again full.  It took me a long time to realise that Mum was refilling the small jars as they emptied, she had me convinced that I had a magic honey and magic vegemite jar!

In 1954 as part of an advertising campaign, this catchy radio jingle for Vegemite was launched

We’re happy little Vegemites as bright as bright can be,
We all enjoy our Vegemite for breakfast, lunch and tea,
Our mummy says we’re growing stronger every single week,
Because we love our Vegemite,
We all adore our Vegemite,
It puts a rose in every cheek!


Sing along or enjoy listening to this 30-second clip – courtesy of the ASO https://aso.gov.au/titles/ads/happy-little-vegemites/clip1/