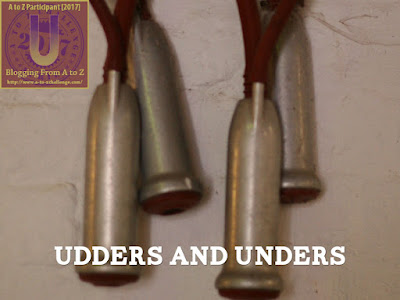 The cows were milked morning and night but before milking their udders were washed. Once the cow was penned in the milking shed a clean pail of warm water and a cloth was used to wipe over the udders before the suction cups of the milking machine were applied. Cows would usually stand contentedly but occasionally a cantankerous beast might try to kick. If there was very little milk to be had, or when the herd was small, a cow was sometimes milked by hand. I remember trying this once or twice but never successfully.

We always had fresh milk, in fact the fridge was often overflowing with milk so milk puddings and custards were frequently on our menu. At school when the free milk in little bottles was delivered many of us disliked it, it was not the day fresh milk we were accustomed to.

Cream, yes lovely thick cream, separated from that milk over in the milking shed, there was plenty of that so we added cream to all our desserts and when there was no dessert we piled jam or honey topped with cream onto slices of white bread.

Sometimes Mum made butter from the extra cream, beaten until the whey separated then salt added and the wooden ridged butter pats shaped the final product.