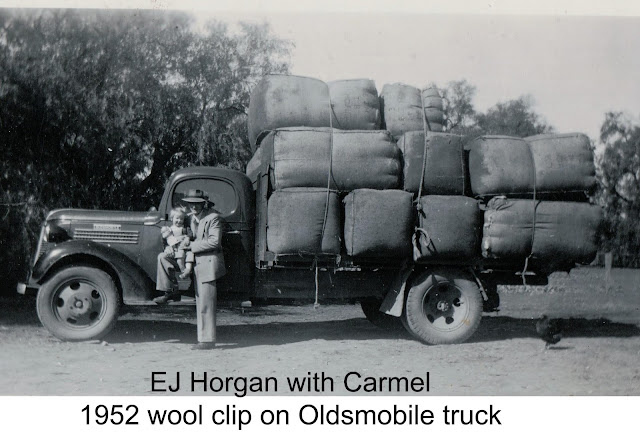 Sheep were raised for the wool clip and were also sold to the abattoir at Pooraka, Gepps Cross on the northern outskirts of Adelaide. On the farm, the sheep were shifted between paddocks as they grazed and when little grass was about, they were fed with bales of hay. From a young age, we all learned to steer the truck while hay was forked from the tray.

During lambing season there would often be weak newborn or orphan lambs that we cared for at the house. As children, we loved having pet lambs and fed them from bottles. It was always surprising to return home one day later in the season and find that the pet lamb, now well grown, had been returned to the flock. Each Sunday Dad liked to go for an afternoon drive around the paddocks to check on the sheep, I always enjoyed these drives. Apart from milking cows morning and night that was usually the only farm work done on a Sunday. Sometimes the full grown sheep that had been pet lambs would still come when called. 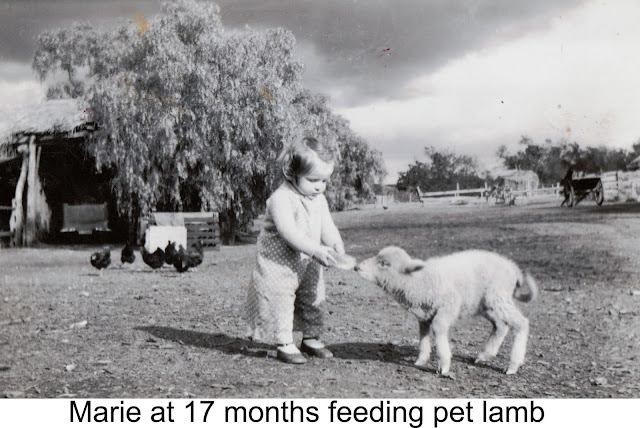 All lambs were tailed to prevent them from becoming fly-blown, a serious problem in Australia. Crutching ensured that the sheep remained clean by removing the dirtied wool around the tail and down the back legs. Faces were also tidied and trimmed. Once a year sheep were shorn. Two or three shearers would arrive, and with Dad and later on, my brother penning and sorting the sheep, the shearers would bend to the task. Each fleece was then tossed on the table for sorting and classing. Into the bales it went and once the clip was complete the bales were branded before being trucked to market. Shearing usually lasted three to four days, a busy, tiring time for everyone.

Mum sewed all of our clothes and taught all the girls to sew. With five older sisters, I had many hand-me-down dresses or dresses made from the material of previously unpicked garments. My early efforts at sewing included making doll's clothes and sewing up hems.There was a Singer treadle machine to learn on and great excitement when the new electric machine, also a Singer, arrived when I was still quite young.

In the sewing room, I enjoyed playing with the button tin, sorting all the buttons into sizes or colours. There were plenty of scraps of material to play with too, these were sorted by colour in a variety of bags that were stored in the bottom of a large chest of drawers. When a garment could no longer be mended all the buttons were cut off to be saved for future use. The old clothes then became dusting cloths or rags for Dad to use in his workshop.

“Take care of the pennies and the pounds will take care of themselves.” This was an oft-repeated phrase I learnt early in life. Money was hard to come by so was to be carefully saved. I had a Commonwealth Savings Bank of Australia money tin and precious halfpennies and pennies, sometimes threepences and sixpences were added to that. It did not have any way to open it apart from using a can opener which would then render it useless. Money could only be removed by tipping the money box upside down and shaking in the hope that a coin would fall out. Once the money box was full, it was taken to the bank where it was emptied and deposited into an account.
When I went to boarding school in 1963, my sister and I were allocated 10 shillings spending money for each term. There were three school terms each year. Each term was about fourteen weeks with one trip home in the middle of each term. Our suitcases were packed with clothes and toiletries but if the soap or toothpaste did not last or was lost, we had to buy supplies from the allocated money. I was well into high school when decimal currency was introduced into Australia on the 14th February 1966. Australians of a certain age will all remember the jingle used to introduce the new currency.