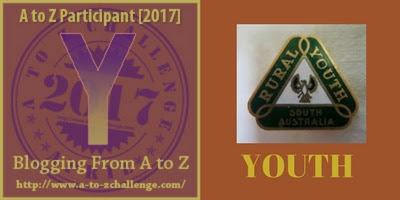 As early as 1949 there were plans afoot to introduce a program in South Australia that would emulate the young farmers' organisation in the UK. By December of 1951, a supervisor had been appointed by the Department of Agriculture to oversee the formation and promotion of Rural Youth Clubs. The early aim of these clubs was ‘to interest young people in both the city and the country in the agricultural way of life’ 1

The first senior and junior clubs were established at Clare in the mid-north of South Australia in 1952.  Fifty-five young farmers attended the first Rural Youth week at Roseworthy College in August of that year. Clubs were established at Kapunda and Freeling and by October of 1953 there were 30 clubs in the state. 2  The clubs were for both male and female, city and country. Statewide competitions and exchanges between the clubs were introduced. Rural Youth organisations soon became important contributors to both their local and state agricultural shows.

My older siblings became heavily involved in the local Rural Youth club. There were informative talks to attend, debates for participation, dances and balls, visits to farms and field days, opportunities for leadership, other areas of the state to see, as well as interstate trips and the chance to host other youth. I have a wonderful picture of my brother ready for a Rural Youth "mock debutante" fancy dress ball but it is not for publication here.

Tarlee Rural Youth club had a strong debating team and in 1962 were the runners-up in the Statewide final narrowly defeated by the Victor Harbour Club. 3

The Rural Youth movement provided companionship, education, skill development and friendship opportunities for many in the years from 1952 up to and beyond the time my reflections about life on the farm finish in 1967.